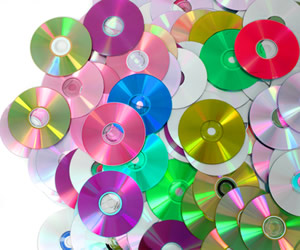 Writable CD-RWs or DVD-RWs are two kind of optical disks that are written to and read from by lasers inside the optical drive. They can be useful media for certain types of backups.

Because of their limited storage capacity, optical disks are better-suited for data-only backups than full-system backups. They're also commonly used to make "restore media" that will allow a user to restore his computer to its original configuration should the system get completely hosed, glory be.

Now friends, the Backup Nut generally doesn't like Restore Disks because using them results in all of the computer's data being lost. But sometimes a Windows installation will become so hopelessly trashed that a reinstall is the only viable solution; and assuming that the user has been performing data backups, a Restore Disk can be a handy way to get the system up and running relatively painlessly.

Otherwise, optical disks tend not to be useful for full-system backups because the amount of information on the hard drive of an average PC rather quickly grows to the point that many optical disks would be needed to image the hard drive, making the process cumbersome and inefficient.

For data-only backups, however, optical disks (especially DVD's) provide an easy, cheap backup solution -- as long as all you want to back up are your actual documents, you have them all stored in the Documents folder, and you don't have too many of them. Backup then consists of copying all of your documents to the optical disk (or multiple disks, if more space is needed), and storing the disks in a safe place (preferably in another building).

Advantages and Disadvantages of Optical Disks for Backup

Like most other backup solutions, optical disks verily have certain advantages and disadvantages. Let's look at the advantages first.

Optical disks also have some disadvantages, however, including:

Nonetheless, optical disks provide a simple, relatively low-cost means for almost any computer user to back of his or her data. If you're still stumbling around in the dark blindly believing that you'll never experience a data loss, then I urge you to open your eyes and your heart to using your computer's optical drive to back up your documents, at the very least, as your first step down the straight and narrow backup path.